This is the third and last post in a series all about tracing. First I convinced you that tracing is an awesome tool by explaining many of it’s benefits and addressing the main objections. Then I explained when and how to incorporate mindful tracing into your art lessons, including some thoughtful questions to help keep your brain engaged and learning while tracing. Today I’m explaining six methods of tracing.

You can listen to an audio version of this blog post at the Ridge Light Ranch podcast called Anyone Can Teach Art. (14:20)

The main points from all three posts about tracing are summarized in this handy Tracing Quick Reference Sheet. It will help you remember each point and it’s great to have on hand when your art lesson includes tracing. It’s free for all our subscribers, so download it here! 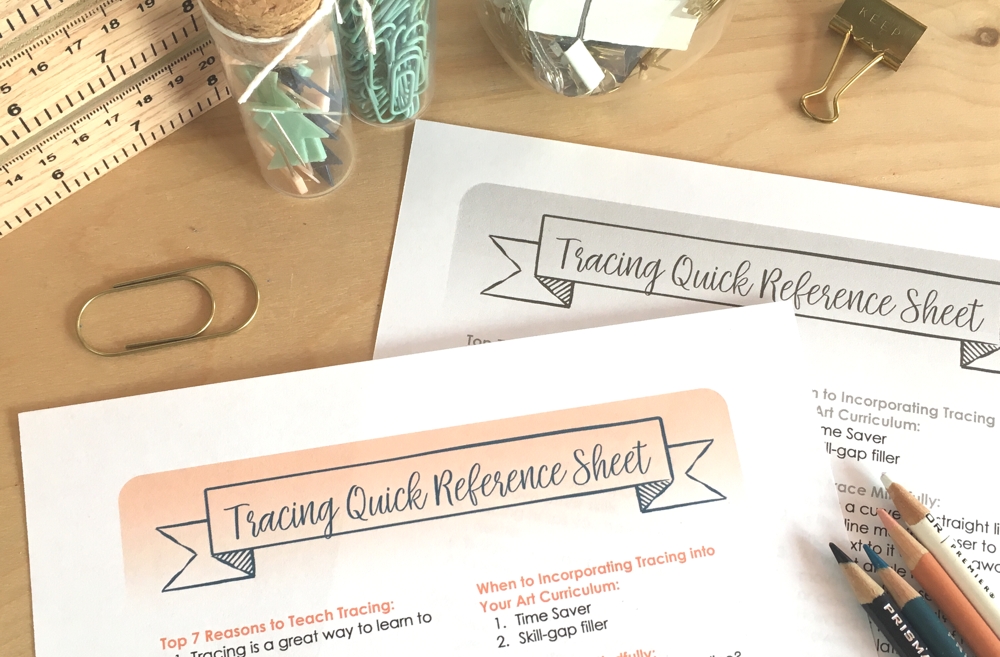 (There are some affiliate links in this post. When you purchase from my affiliate link, I earn a small commission at no additional cost to you. I promise to always be honest in my opinions of products and never recommend something I wouldn’t buy myself!)

Now you know when to use tracing and how to coach the students during tracing, but what’s the best tracing setup for your classroom or homeschool room? Here are a few options to choose from- but first, I suggest you always tape the bottom paper and top paper to each other with a removable tape, like washi tape. This will prevent the two papers from shifting during the tracing process. Before you remove the tape, pull your tracing away from the light source and make sure you didn’t miss tracing any lines.

I like to think of this method as the old-school method of tracing. This is how I learned to trace growing up and I still find myself using it for something super quick. Layer a blank piece of paper over the picture you’re tracing, hold them both up on a bright window, and trace. 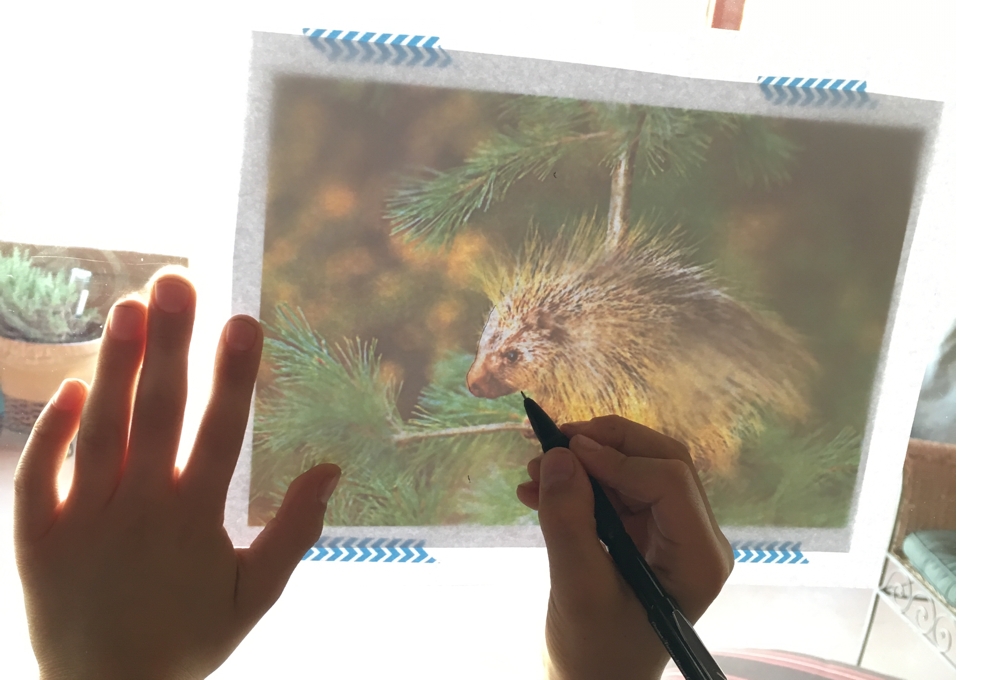 (Why did my kids decide they wanted to trace a porcupine?????)

This one is pretty self explanatory. You simply layer a piece of tracing paper over the picture you’re tracing, and trace. I know some teachers like to purchase deli wrap paper (the sort of paper you’d wrap a sandwich in) from Costco or Sam’s Club instead of tracing paper because it’s less expensive. However, you’ll need to invest a little time in cutting it down to a useable size. The downside to tracing paper is that it tears easily and it’s harder to see the finished image. To make the image easier to see when you’re done, tape or glue the tracing paper to a white piece of paper.

This is my favorite method! In times past, light boxes (or light tables) were bulky and hot, but with all the new LED lights they’re thin like an iPad and cool to the touch, even after using them for hours. In fact, the industry tends to call them “light pads” now. Light pads are simply a hard surface with a diffused light source under it.

I got an ArTech 9in x 12 inch light pad a few years ago and I LOVE it! It’s very simple with a range of brightness settings. I wanted to give you a link to it but it doesn’t seem to be available anymore. I researched a bit on Amazon and I like the look of this light box, (April 2017 UPDATE: the transformer in the cord of my old light pad blew out and replacing the cord is about the price of a new light pad! I purchased the light pad I recommended here and have been enjoying it!)

Expect to pay about $30-40 for a light pad. Here are some questions to ask yourself when purchasing a light pad for yourself or your students:

4. Trace Using a Flashlight App on an iPad or Tablet

A good friend of mine recently reminded me of this great little hack! You can download a free flashlight app. When it’s running, it turns your tablet device to an all-white screen, which makes it a lot like a light pad. I don’t recommend this method for a young student because it’s easy to press too hard and that might scratch the surface of your tablet! 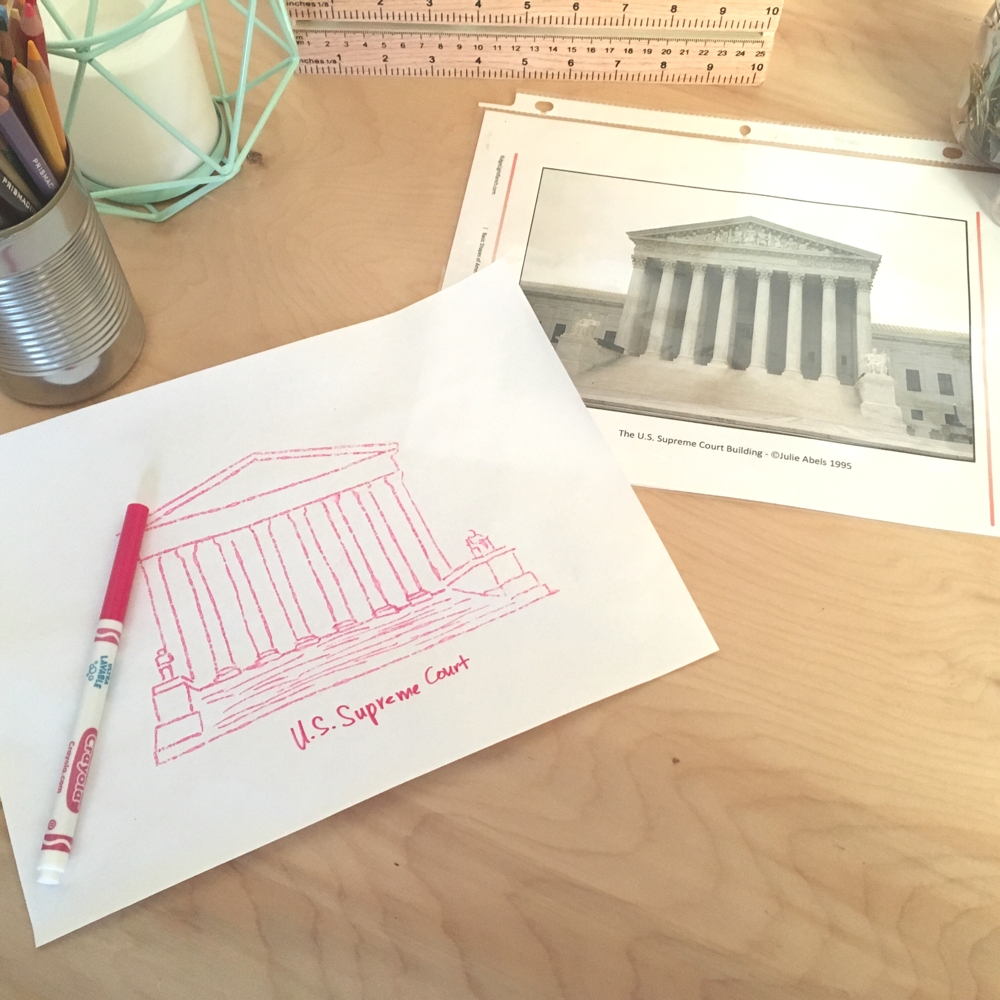 It turns out if you write on on a sheet protector with wet-erase markers and then the ink gets wet, the ink transfers onto whatever it touches. If it touches paper or clothes it’s rather permanent too! I discovered this by accident one day- I’m sure you can imagine how this could easily be a bad thing. However, it can also be a good thing. Here’s how:

The ink transfers to the paper and you have a nice mirror image of your drawing. This is a fun, almost magical method of tracing!

If you’re over 40ish you probably remember the old days of having an actual separate piece of dark carbon paper between the sheets of a multi-layer form. Nowadays when we have forms with multiple copies, it’s all baked into the paper, but you can still buy standard carbon paper like this. It’s fairly cheap, a lot of fun to use, and allows you to trace onto something totally opaque like a decorative ceramic plate, a terracotta pot, or a piece of wood.

There are also a few carbon paper equivalents:

1. Newspaper: You can use a piece of newspaper between your image and your surface. Be sure to grab a page that has a lot of ink and no shiny coating. To test it, rub your fingers around on it. Your fingers should look kinda dirty when you pull them away.

2. Pencil: You can make your own version of carbon paper by laying down a layer of pencil on the back of your paper. To do this, flip your image or drawing over so you’re working on the back side. Now hold your pencil almost horizontal to the paper and color back and forth, making the paper dark grey with pencil. 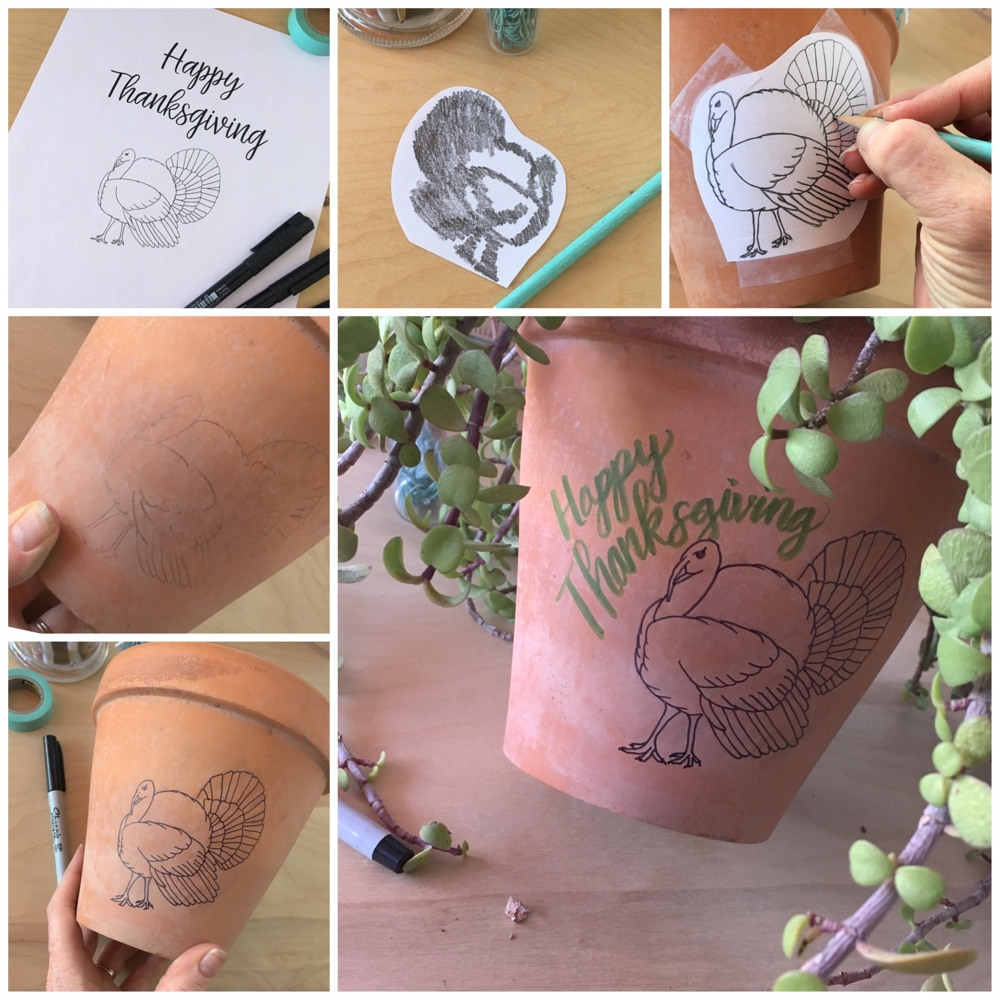 I usually lay down the pencil layer while working on the light pad. This allows me to see through to my lines on the front of the paper and only lay down the pencil layer on the back side where I will need it, instead of having to cover the whole paper. I’ve seen professional artists use this method to transfer a sketch they drew onto canvas because it’s very hard to erase pencil lines completely from canvas (So, if you’re going to leave any canvas white, you don’t want to sketch on the canvas.)

3. Chalk: If your project surface is very dark, lay down a layer of chalk instead. This, however, is my least favorite carbon paper equivalent because it can smears so easily, so be sure to help younger students when moving things back and forth. Also, keep in mind that some media (most markers and some paints) will not adhere to a surface covered in chalk. Be sure to test out the components of your project before you have a classroom full of students working on it!

Using Carbon paper or an equivalent is simple:

Ready to take it to the next level? Try air tracing! This is an advanced method of tracing that’s hardly tracing at all. Air Tracing is when you look at an object several feet away, hold your finger out in front of the object, and ‘trace’ its lines in the air. You can also hold your pencil out and trace along the curves of an object. We often do this on a large scale when teaching our children their letters, but experienced artists know to do this when drawing from life. It’s especially useful when artists are drawing from life instead of a photo!