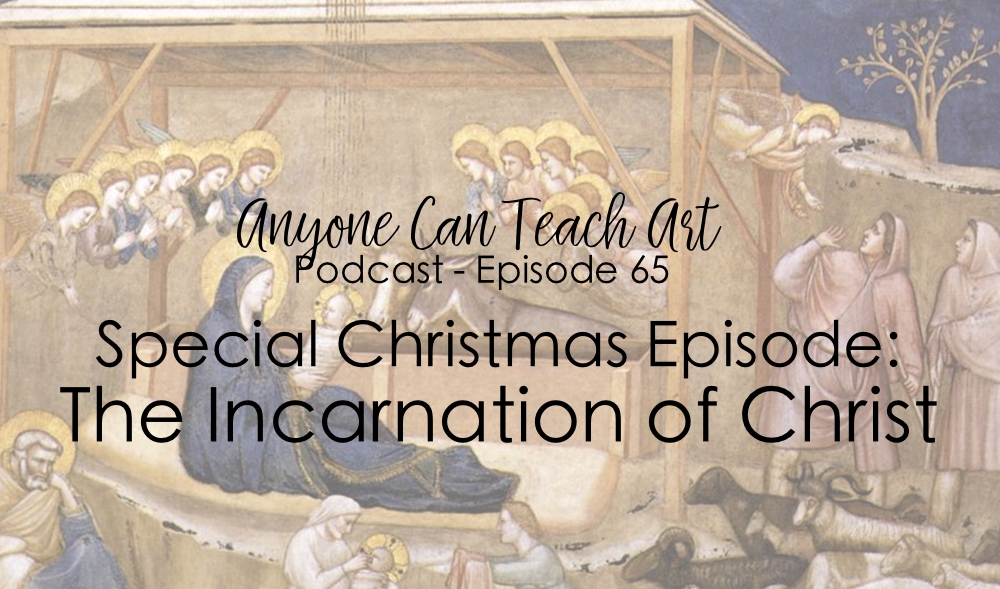 The birth and incarnation of Christ are often featured in great works of art- but what is the significance of the incarnation for Christians?

This week Julie and Deanna are wrapping up Season 3 of Anyone Can Teach Art with a special episode!  Instead of an art subject, today we’re talking about what the Incarnation means to us by studying John 1:1-18.

Tell us what you think about listening to Deanna explain theology!

You can connect this concept to art by looking through some of the famous works of art about the birth of Christ (below)!

The Incarnation is Jesus becoming flesh – it’s the theology term for Jesus being born in human form.  Since Christmas is the time Christians around the world and through the ages celebrate the birth of Christ, we want to think about what it means that Jesus became a human being.

The New Testament begins with four gospels, or stories of the life and death of Jesus.  Each gospel chooses a different way to introduce Jesus.  The birth narratives that we usually read at Christmastime come from Matthew and Luke, but the gospel of John is more abstract and theological.  It’s an introduction to Jesus that tells us a lot about who Jesus is and what his nature is.

The Word is the Greek word Logos, which in Greek philosophy meant the rational principle that unites and governs all.

This passage teaches the Jesus Christ was always in existence, was present and instrumental in creation, was fully God and became fully man.  Jesus came and “tabernacled,” or “pitched his tent among us.” Jesus came to be right in the midst of us, making grace and truth real in our world.