“What’s an art period vs an art movement?” What are the major art periods and movements? How might I recognize works of art from each? Who are the famous artists from each period and movement?”

I’m so glad you asked! I’m answering all those questions for you here!

You can find a list of my art lesson plans, arranged historically by art period or movement here.

If you’re teaching art, you might also be interested in my book, Anyone Can Teach Art, which helps you break down all the things you’ll want to know and teach about the art world!

Art Movement: a collection of artists and their works of art with a common philosophy or goal, technique, style, or time period. Many movements formed a club with a manifesto, a spokesperson, and exclusive art show. 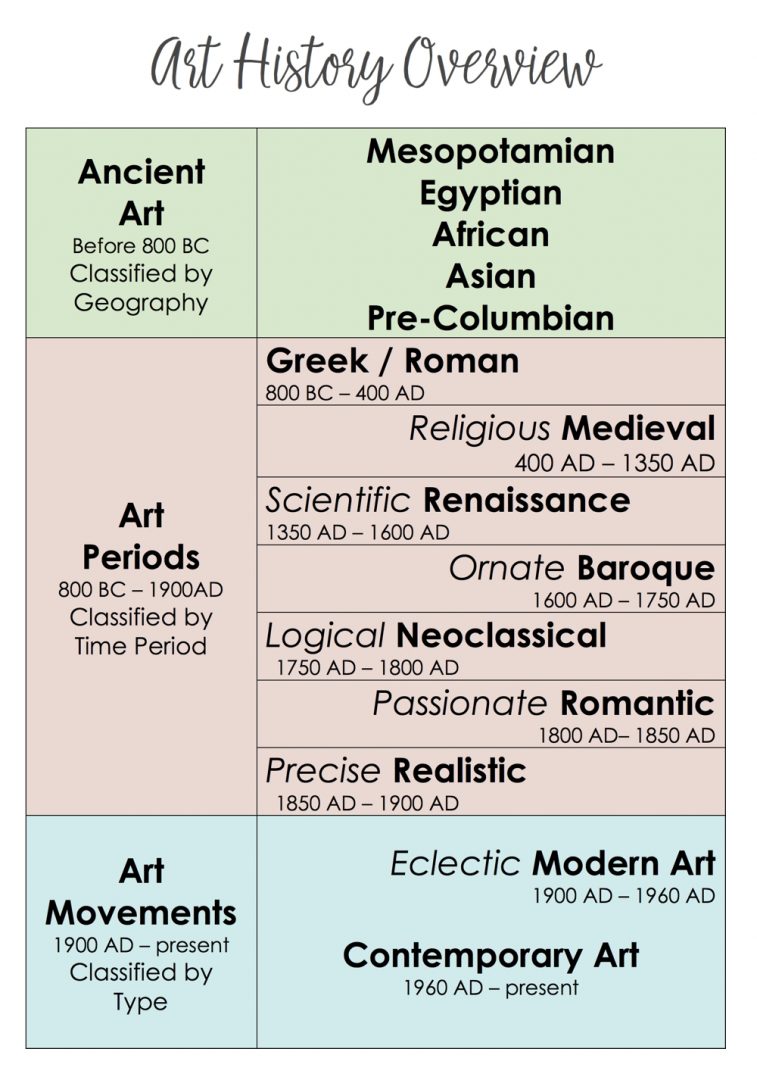 Ancient art tends to be categorized geographically because the diverse cultures remained relatively secluded, resulting in each culture’s art usually having a distinct look and purpose. This period generally includes everything prior to the rise of Greece around 800 BC. However, in some more secluded regions, it includes later art as well. Mesopotamian, Celtic, Egyptian, African, Asian, and Pre-Columbian (from the Americas) Art are all included in this art period.

The Classical art of the Greek and Roman empires focused on beauty, virtue, and harmony. Much of the art centered around religious themes or the human form and included the ideal proportions of the golden ratio. Greek and Roman art includes paintings, mosaics, vases, sculptures, and architecture.

Medieval art includes paintings, mosaics, architecture, tapestries, and illuminated manuscripts. Religious and mythologic art was created, mostly for the churches since the Catholic church was the center of most of the power and funding. Medieval art is usually broken into several phases:

Germanic tribes settle in the collapsed Roman empire and bring their style of decorative weapons, tools, and jewelry

Artists depicted flat, emotionless mythological and religious themes as seen in their art.

Celtic Medieval art from the British Isles is called Insular Art and is known for stylized figures and abstract geometric patterns.

Contrasting to the Medieval art, Early Renaissance art was much more realistic and more individualistic. Artists had knowledge of a wide range of subjects and painted a variety of subject matter- not just religious scenes with the newly explained linear perspective.

Continued knowledge of a wide variety of subjects, including science, helped artists depict accurately foreshortened humans with emotion and expression. Artists focused on ideals of beauty and achieving perfect composition

This art, influenced by the Protestant ideas, was more humble than other Renaissance art, but still very realistic. Genre paintings, which showed everyday life, and printmaking became popular.

This art was similar to High Renaissance art, but more colorful and joyous.

This was a movement at the end of the Renaissance period when artists represented their emotions and imagination with visual dissonance and instability.  This art usually included distorted and twisted figures and used unnatural colors and light sources.

An art period with highly ornate embellished depictions of important events including royalty or religious stories. Artists focused on using deep colors, lots of details, asymmetry, movement, drama, symbols and high contrast of light and dark. This period is often associated with the Catholic Counter-Reformation since it pushed back against the plainness of Protestant art.

This art movement within the Baroque period was even more extravagant than regular Baroque. Artists used a theatrical level of drama with elaborate details and focused on the lifestyle of the aristocrats.

A return to Greek and Roman ideas of logic and reason

Romanticism: an art period where artists honored nature, individualism, intuition, and emotion. The movement was an idyllic and dramatic reaction to the artists’ dislike of the Neo-Classical movement, the Industrial Revolution, and the Age of Enlightenment.

Realism: an art period where artists tried to represent their subjects truthfully and accurately. The movement was a reaction against Romanticism and the Industrial Revolution and focused on everyday life, even the unpleasant parts of life.

This anti-industrial movement, borrowed elements from the Medieval and Romantic periods, as it stood for social reform, believing the arts could affect society. It focused on utility and quality of design and was predominantly seen in furniture and architecture.

A style of art that is cultural, utilitarian (meaning it has a use in addition to its beauty), and usually created by an artist without formal art education. Folk Art is disconnected from fine art movements.

An art movement within (or an extension of) the Realistic period where artists portrayed the rural American Midwest and Deep South with conservative, humble, familiar (and somewhat idyllic) scenes of life. Brought about during the Great Depression, it portrayed large urban areas as the source of America’s depression-era problems.  It was also a reaction against the current rising of Modern art and appealed to most Americans, who didn’t understand Modern Art

Modernism is art period based on a belief in progress and idealism. It assumed principles could be used to explain reality. Modernist artists focus on techniques and processes instead of a limited group of subjects. Unlike previous art periods, which had mostly unifying characteristics, this art period includes many diverse art movements.

Impressionism is an art movement and style of painting that focuses on capturing the feeling or experience of an ordinary subject on the spot (not later in an art studio). The art included bold colors to depict light, visible brush strokes, and, when viewed up close, an out-of-focus appearance.

Post Impressionism is an art movement in reaction against Impressionism and the Impressionists’ determination to depict light and color naturally. Post Impressionist artists explored abstractionism and focused on creating art that was a window to the artist’s mind and soul (where traditionally, art had been a window into the world). They used a lot of patterns and put emphasis on symbolism. Within Post-Impressionism was a wide variety of art. The geometric end of the spectrum led to Cubism and the Expressive end led to Abstract Expressionism.

Art Nouveau was an art movement influenced by Japanese art and Arts and Crafts. It was very ornate and frequently featured exotic plants. It was called Tiffany style in the US.

Expressionism was an art movement centered in Germany where the artist distorts reality in order to express emotion. They were inspired by Post Impressionist and Symbolist painters.

Fauvism was an art movement named Les Fauves, which in French means “the wild beasts,” because of their extremely distorted figures and unnaturally vivid colors. The fauvists were very interested in scientific color theory and the context of color. Their art was sometimes abstract

Cubism was an art movement that viewed the subject from multiple angles and portrays it using geometric shapes, resulting in abstract art.

Dada was an art movement where artists focused on making satirical or unpleasant art in an effort to shock the complacent middle class into asking themselves hard questions about materialism, war, and society. It was largely in reaction to the horrors of WWI and was associated with anti-capitalism and the far left.

Surrealism was an art movement that grew out of the Dada movement where artists, influenced by Sigmund Freud and Karl Marx, aimed to channel their unconscious mind to reveal pure imagination without the restraints of reason, morals, or aesthetics. The art from this movement is often strange and illogical but includes precisely painted everyday objects.

Abstract expressionism is an art movement where artists adopted the Surrealist idea that art should come from the unconscious mind. Starting in New York, it was influenced by leftist politics and fit America’s mood of anxiety and distress.

With the rise of Abstract Expressionism, New York became the art center of the world, where it had been Paris, France in years past.

The Contemporary Period is still revealing itself. Until we have the perspective of history, we won’t fully know what attributes and ideals best characterize the art of our time. Additionally, terms like “contemporary” and “post-modern” are continuing to be defined by art historians there’s some disagreement in the art world on exactly what is included in each. The art and artists of these time periods are also continuing to be categorized. In spite of all these, there are still several art movement titles that fall within this time frame we can learn.

Postmodernism is an art period or movement that is a reaction to the utopian ideals of progress, clarity, and simplicity from the Modern Period. It is characterized by cynicism and rejection of the idea of universal truth and objective reality. Embracing contradictory layers of meaning, artists believe an individual’s experience is truer than an abstract idea. The art from the period usually has anti-authoritarian, rebellious themes and is full of irony as it aims to break down classes or undermine authenticity. This movement encompasses several other movements including Pop Art and Conceptual Art.

Pop Art is an art movement where iconic or everyday items were celebrated by making them the focal point.

Op Art was a movement that used lines, space, repetition, and sometimes color to achieve the illusion of depth and movement.

Conceptual art is an art movement that holds the idea of the work of art is more important than the creation of the work of art, therefore, the art doesn’t have to be physically created to be valuable. The theory also holds that and aesthetics, expression, skill and marketability of a work of art are irrelevant.

You can find a list of my art lesson plans, arranged historically by art period or movement here.

If you’re teaching art, you might also be interested in my book, Anyone Can Teach Art, which helps you break down all the things you’ll want to know and teach about the art world!